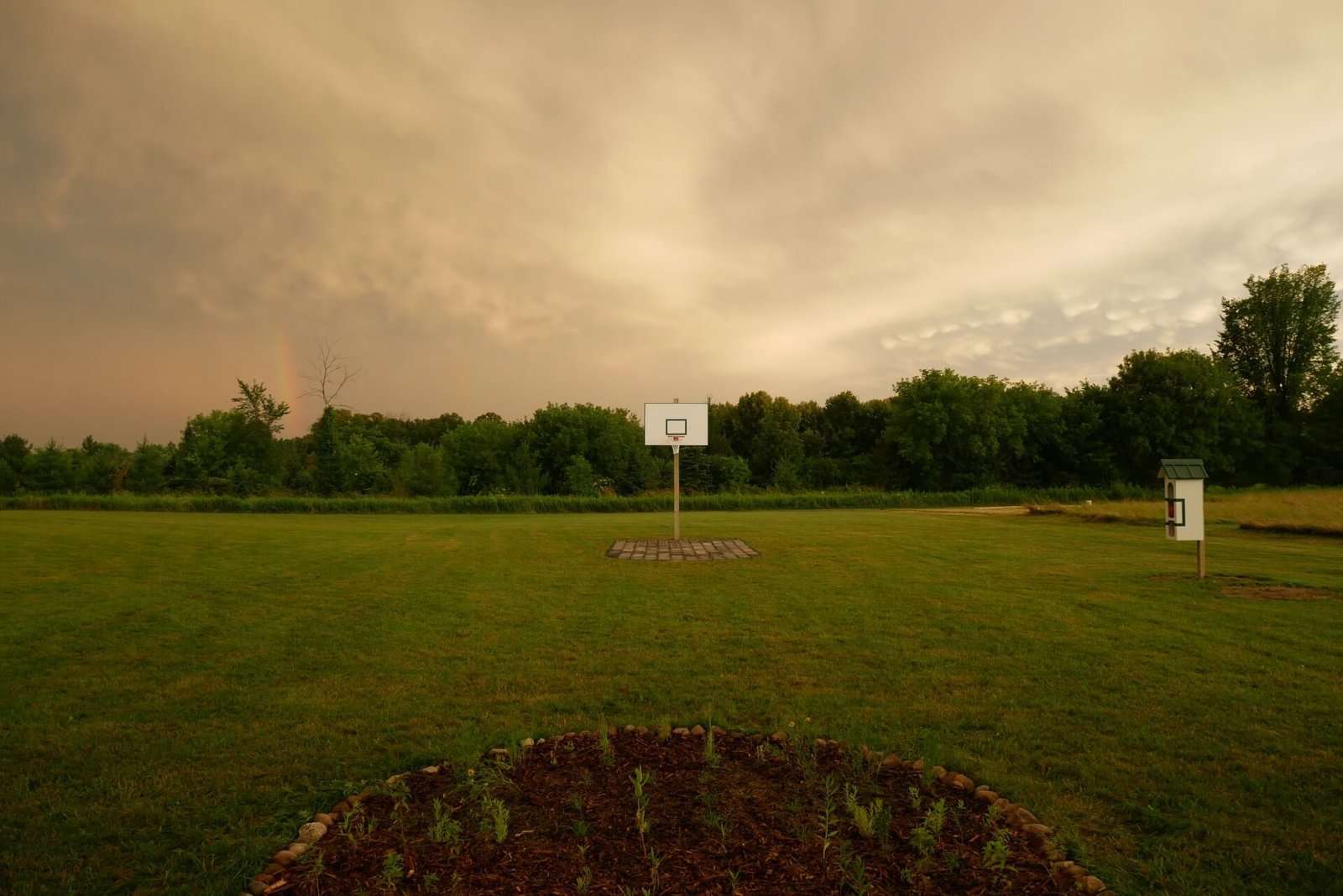 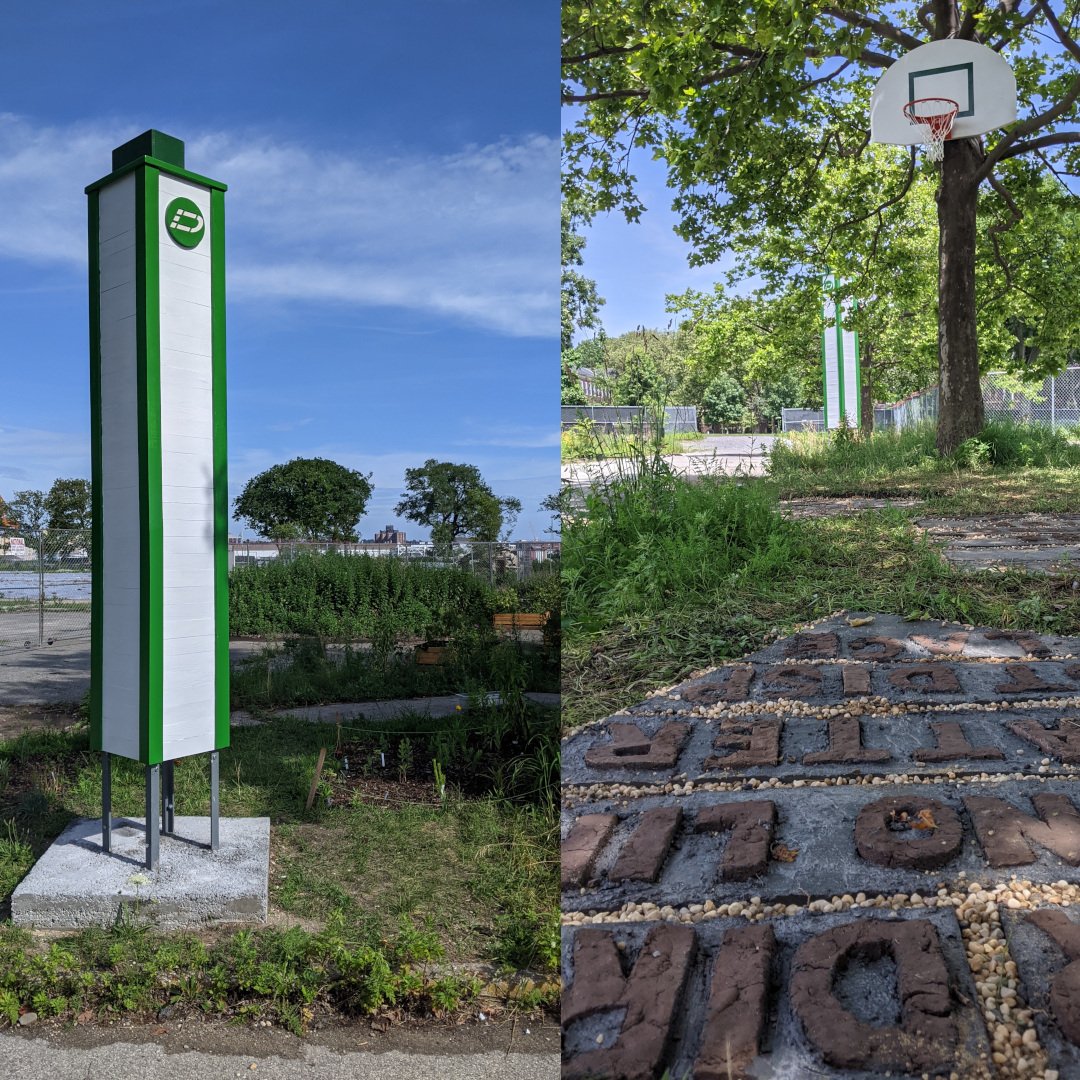 The Urban Soils Institute will be on-site doing free soil testing. More event info on our News page. Scroll Down for more about Dirtball.

Dirtball is an invitation to a game that is always going on beneath our feet. The court invites you to join this soil making game along with birds, bugs, plants, minerals and weather. 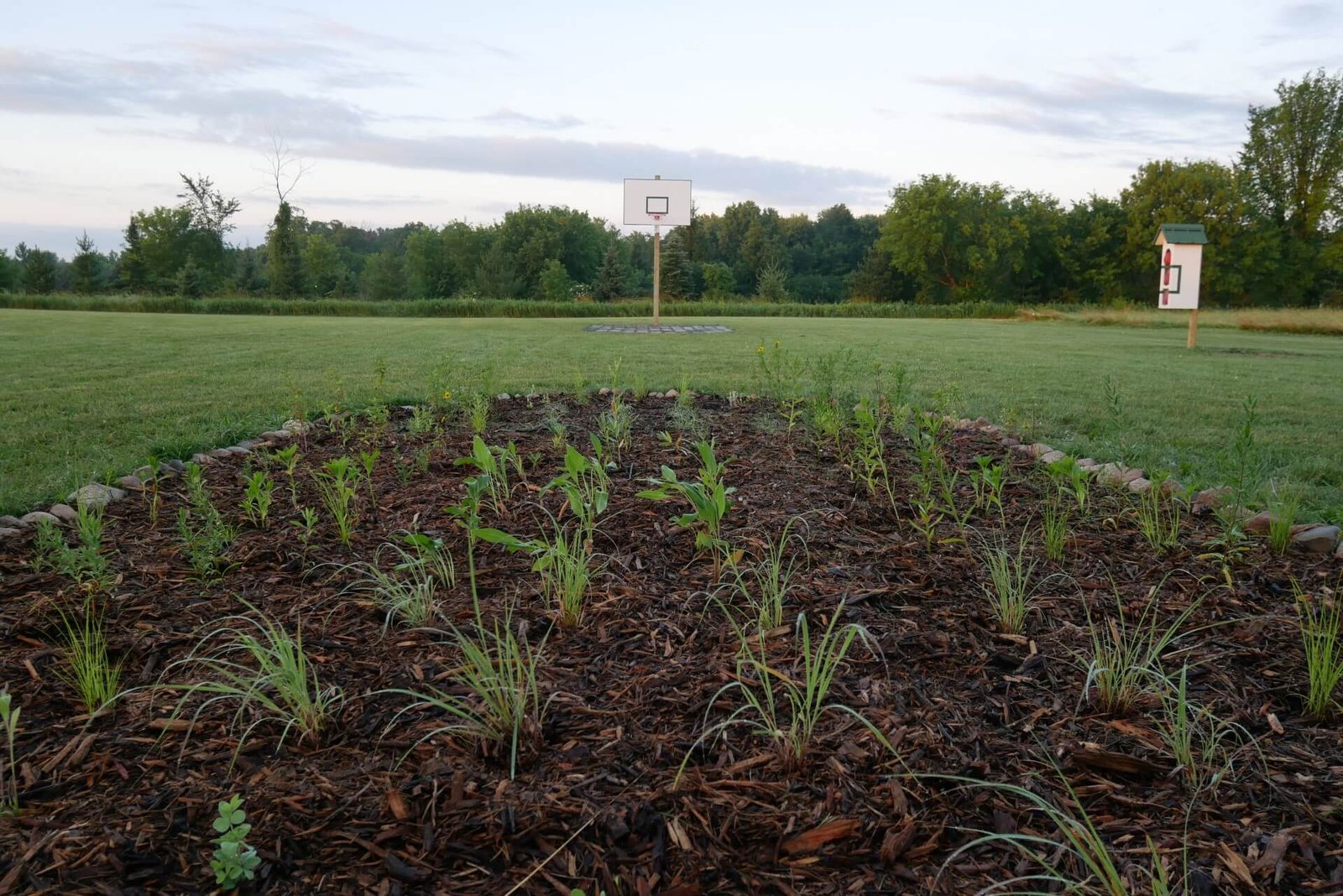 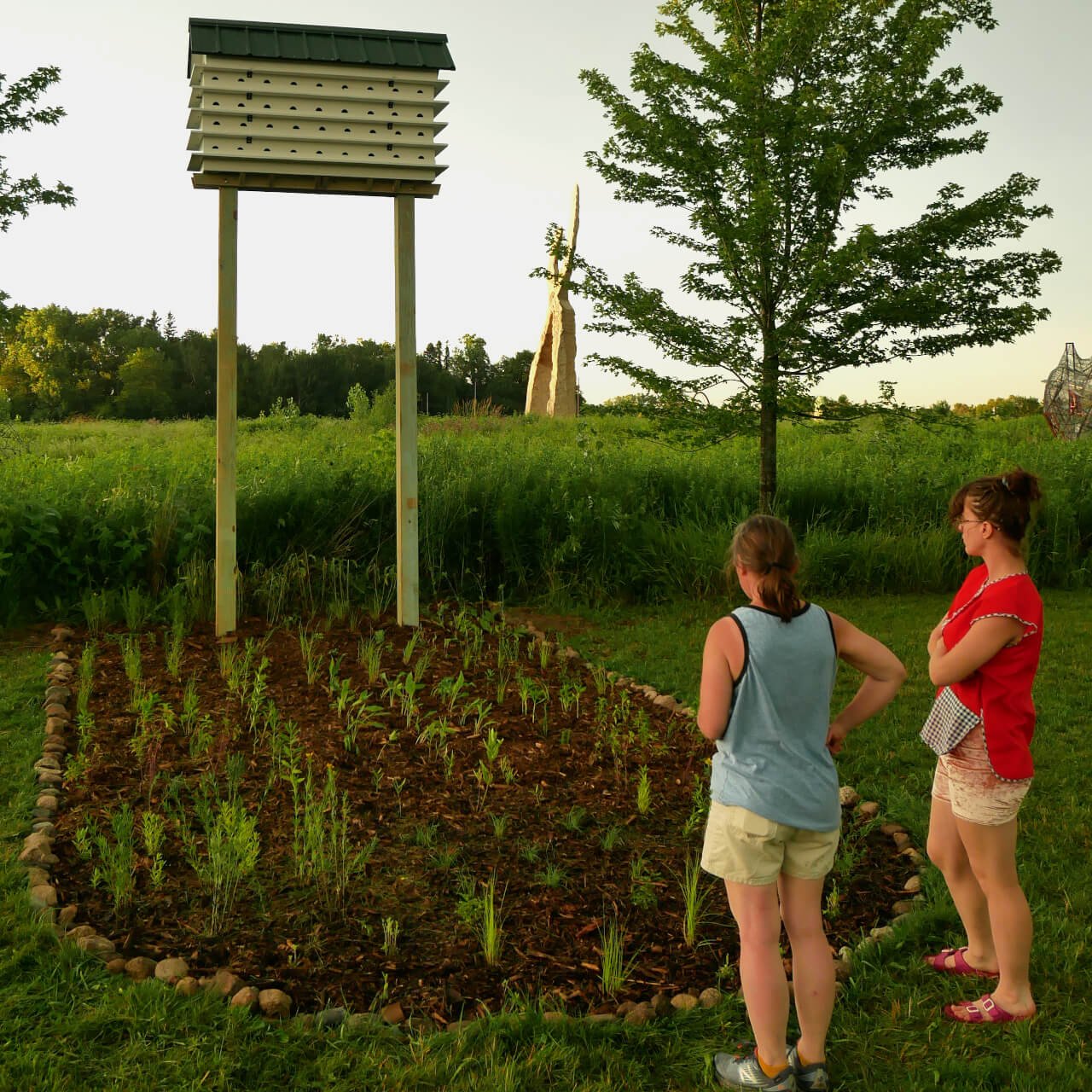 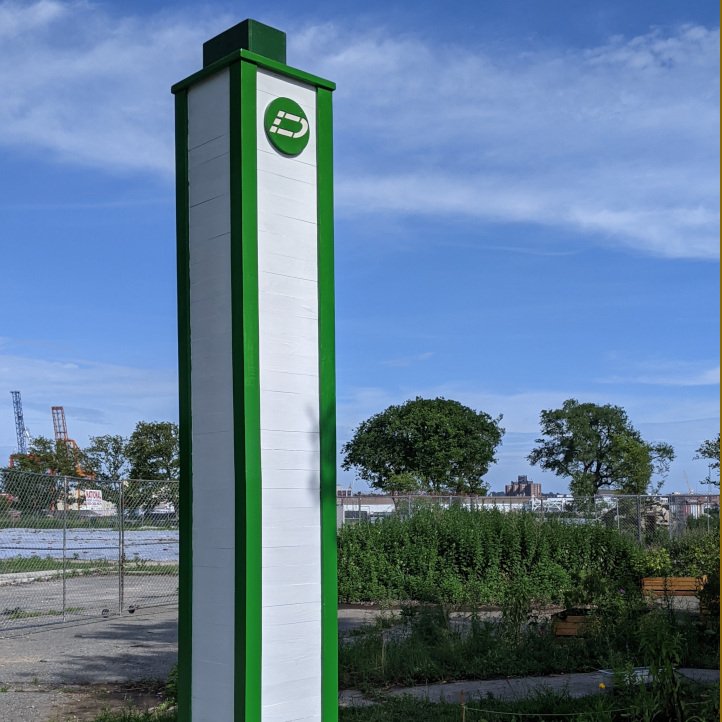 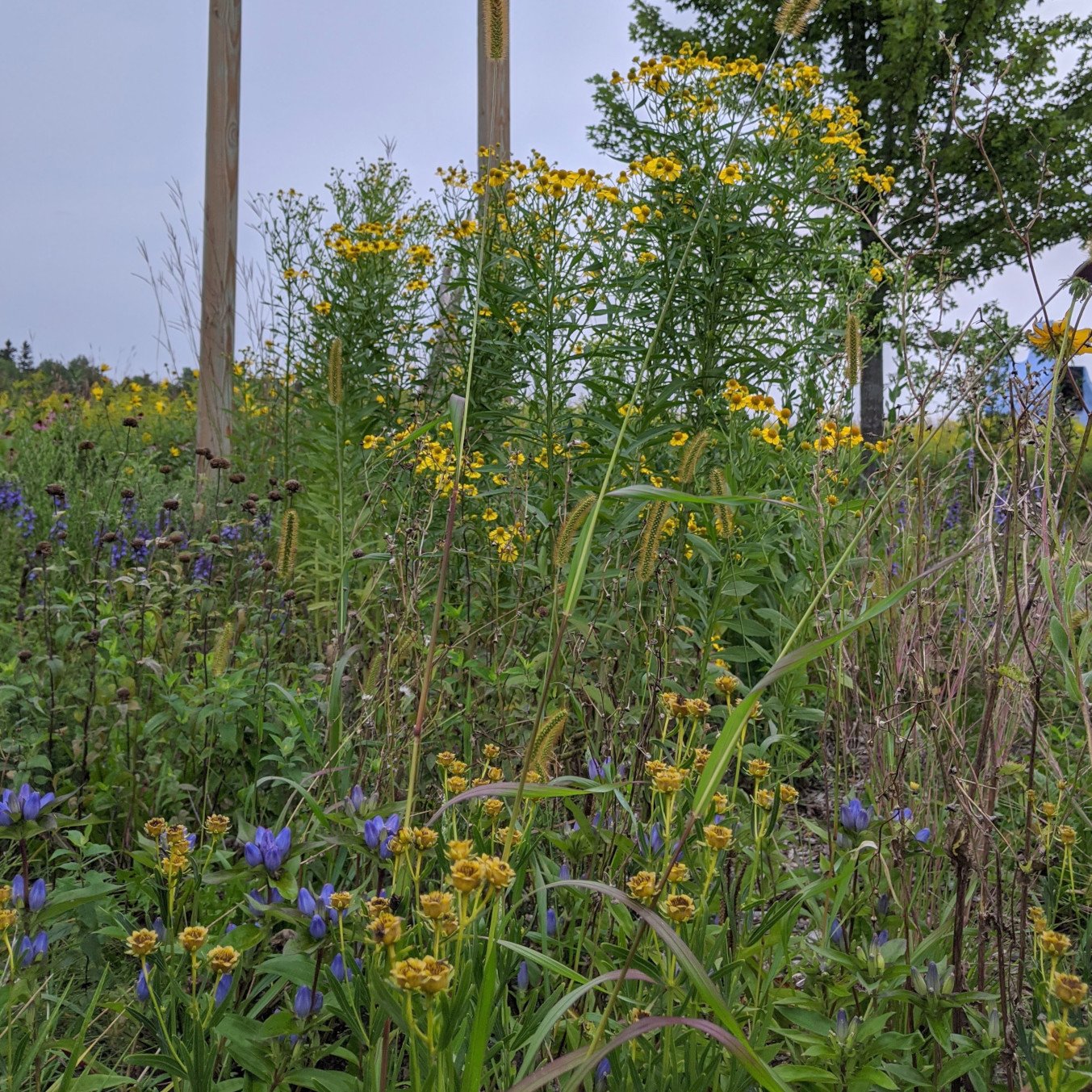 The plants in the key gardens reach deep into the ground and draw minerals to the surface. Bird houses invite more than human players. At Franconia a purple martin hotel and on Governors Island a chimney swift tower. The birds turn mosquitos and other aerial bugs into fertilizer. 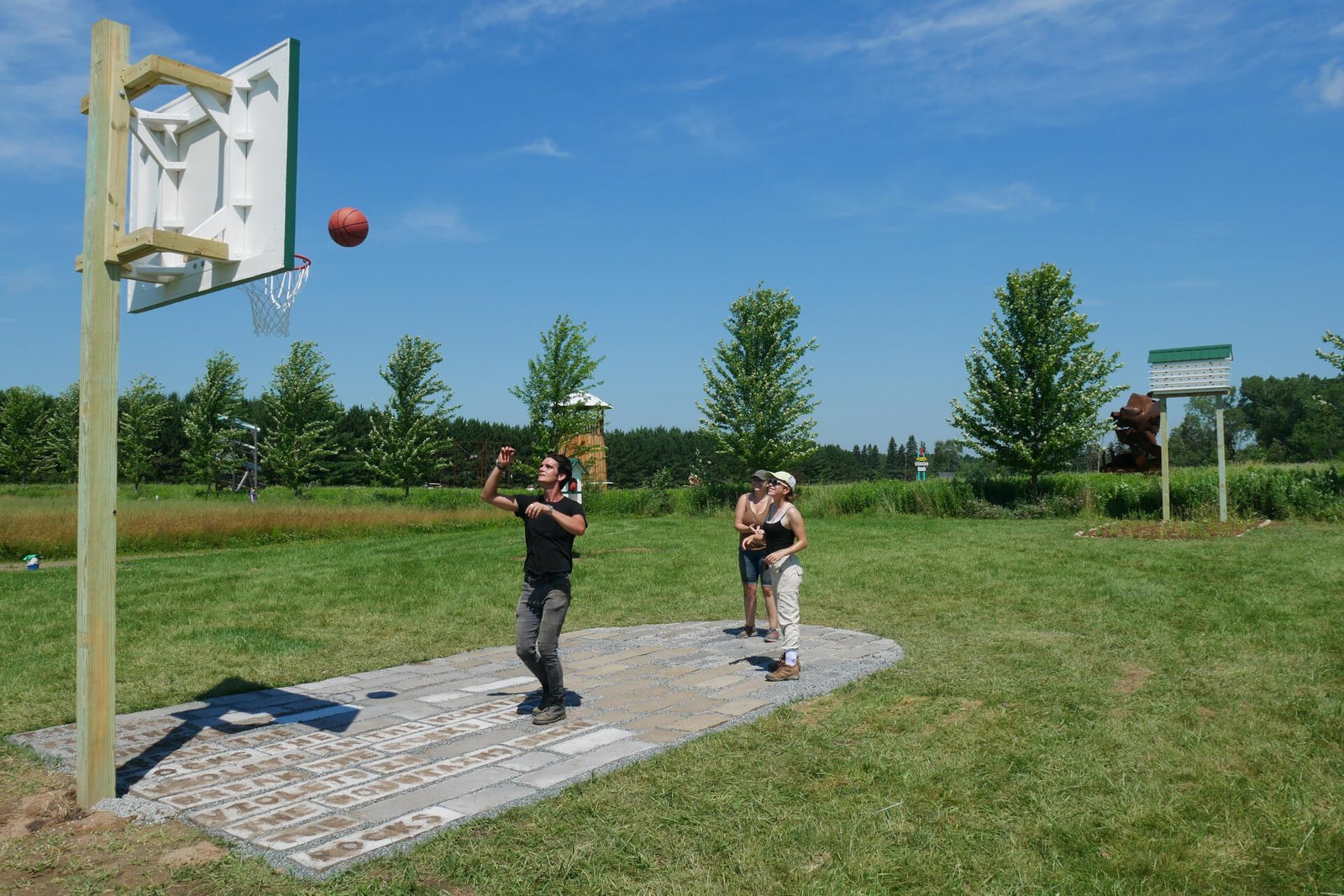 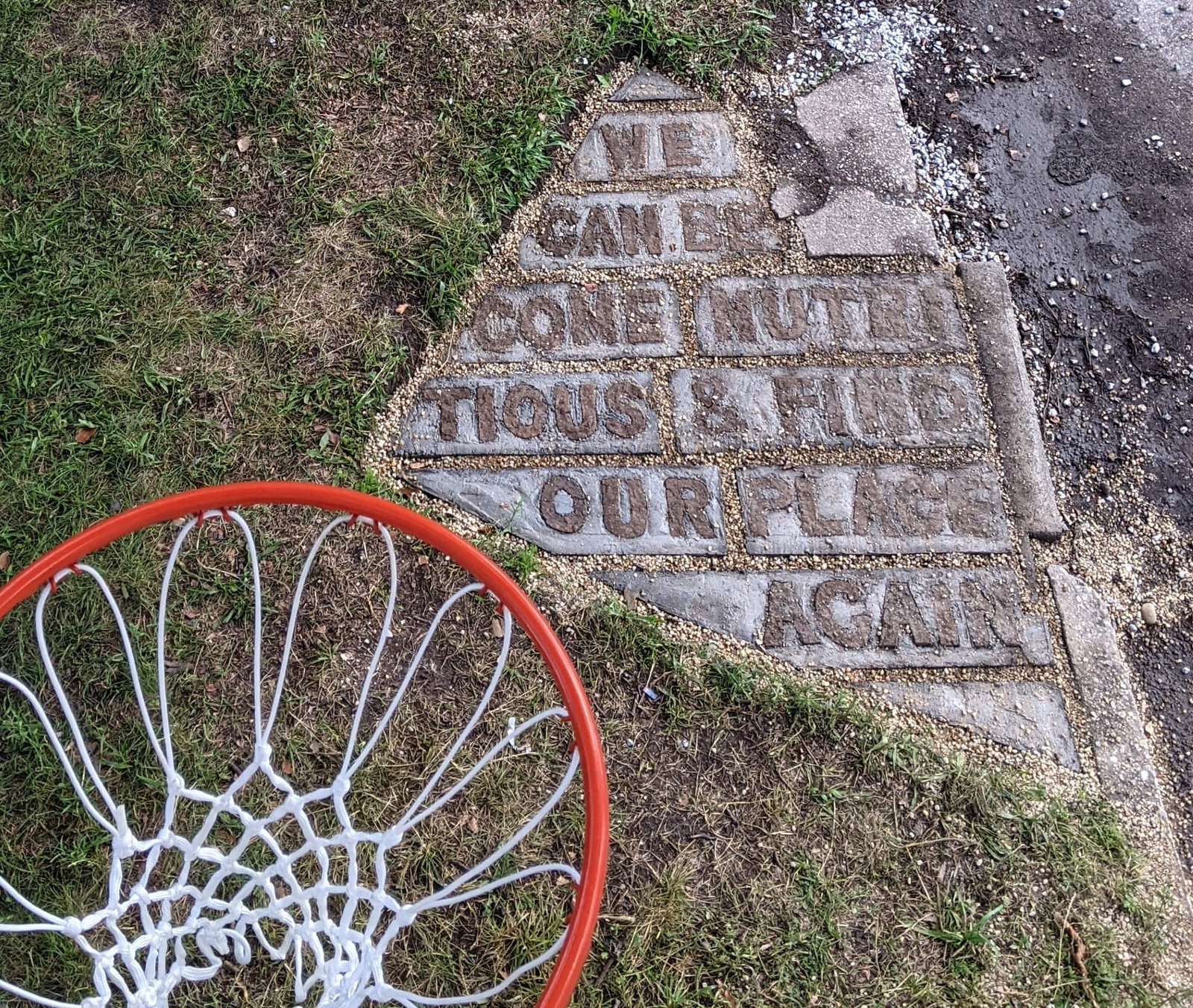 The concrete beneath the basketball hoop is made of a variety of experimental mixtures. As you dribble the ball you help break apart the concrete and release minerals into the ground that help the soil flourish. The enriched soil beneath the court is better able to pull carbon dioxide from the air and help reduce global warming. 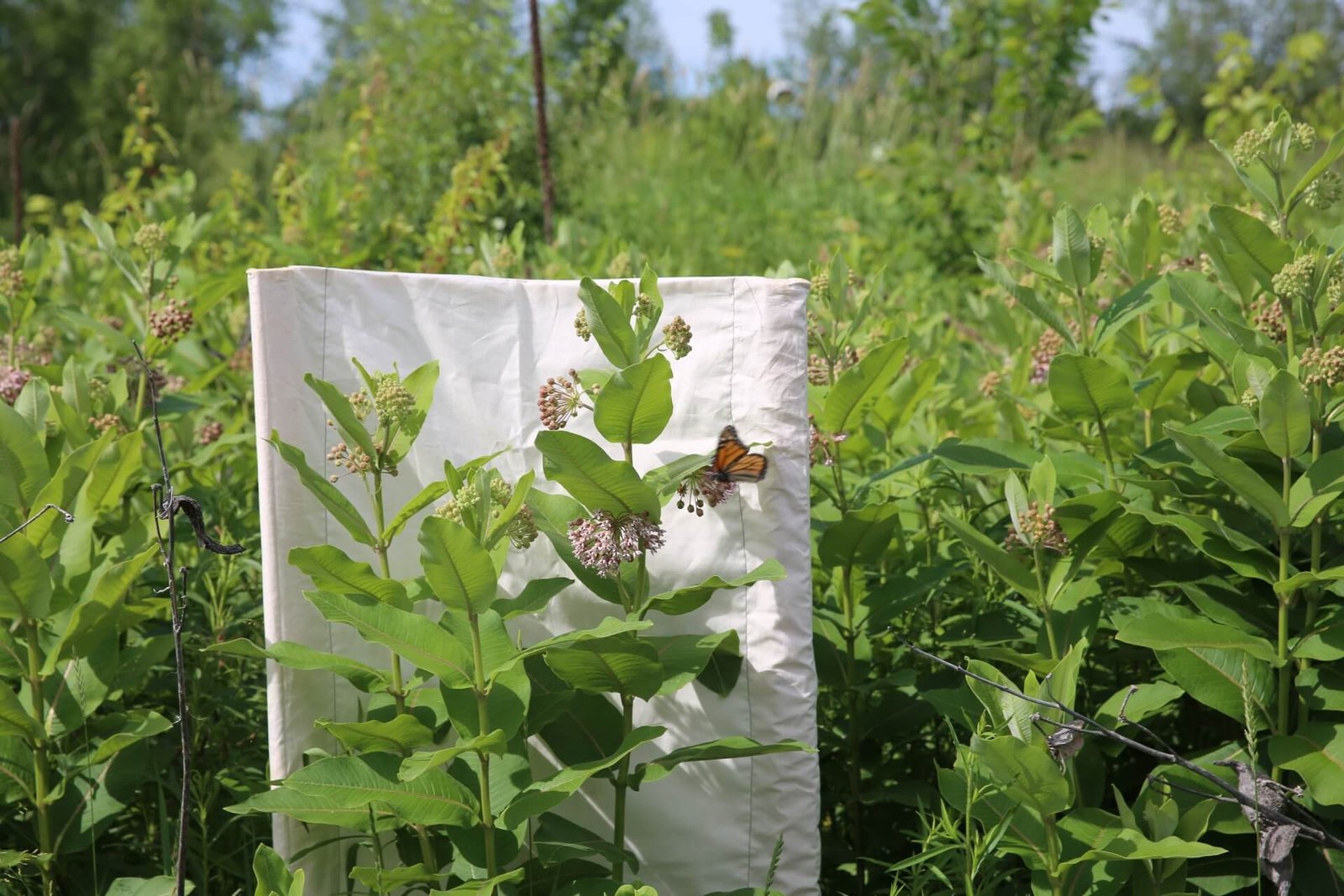 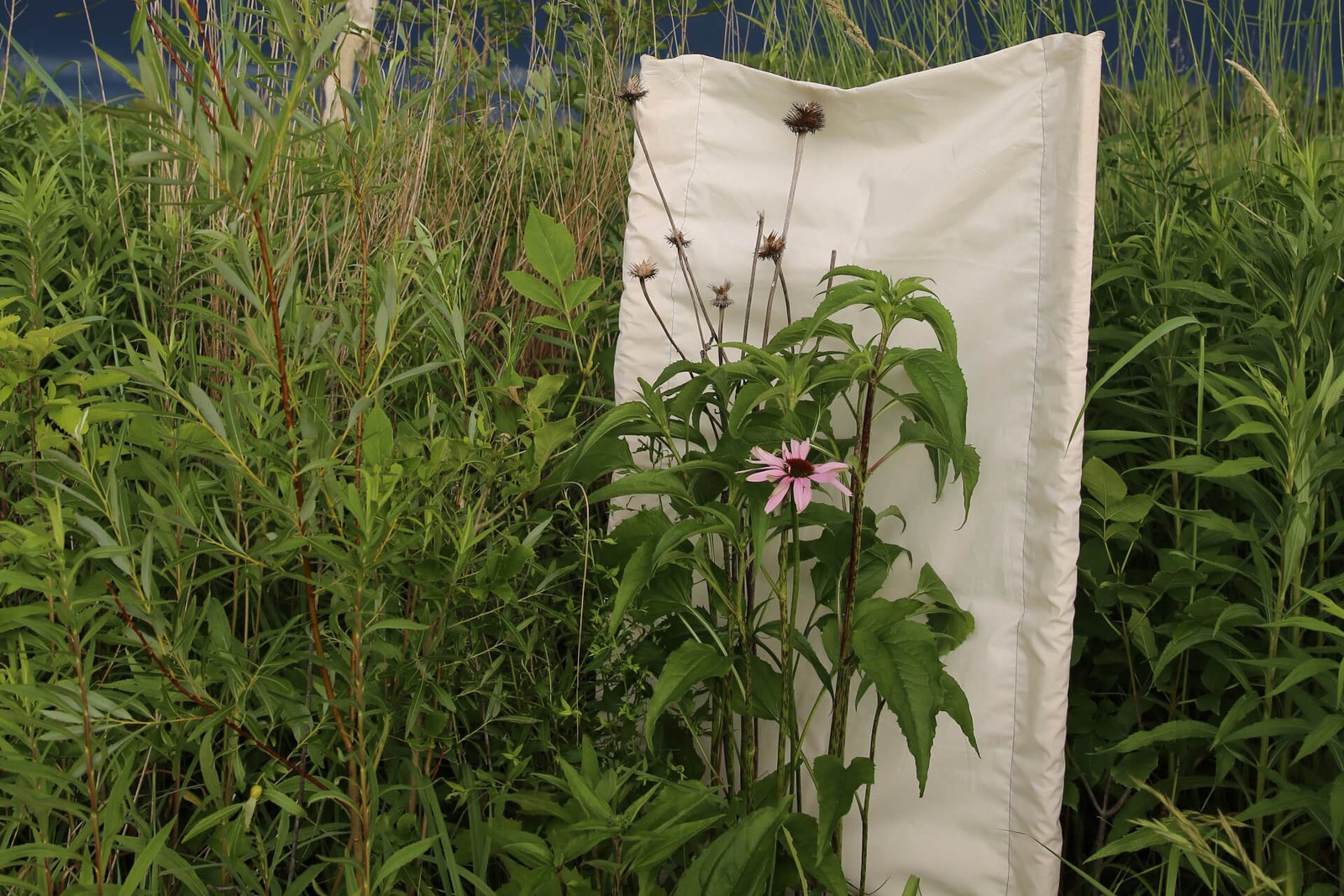 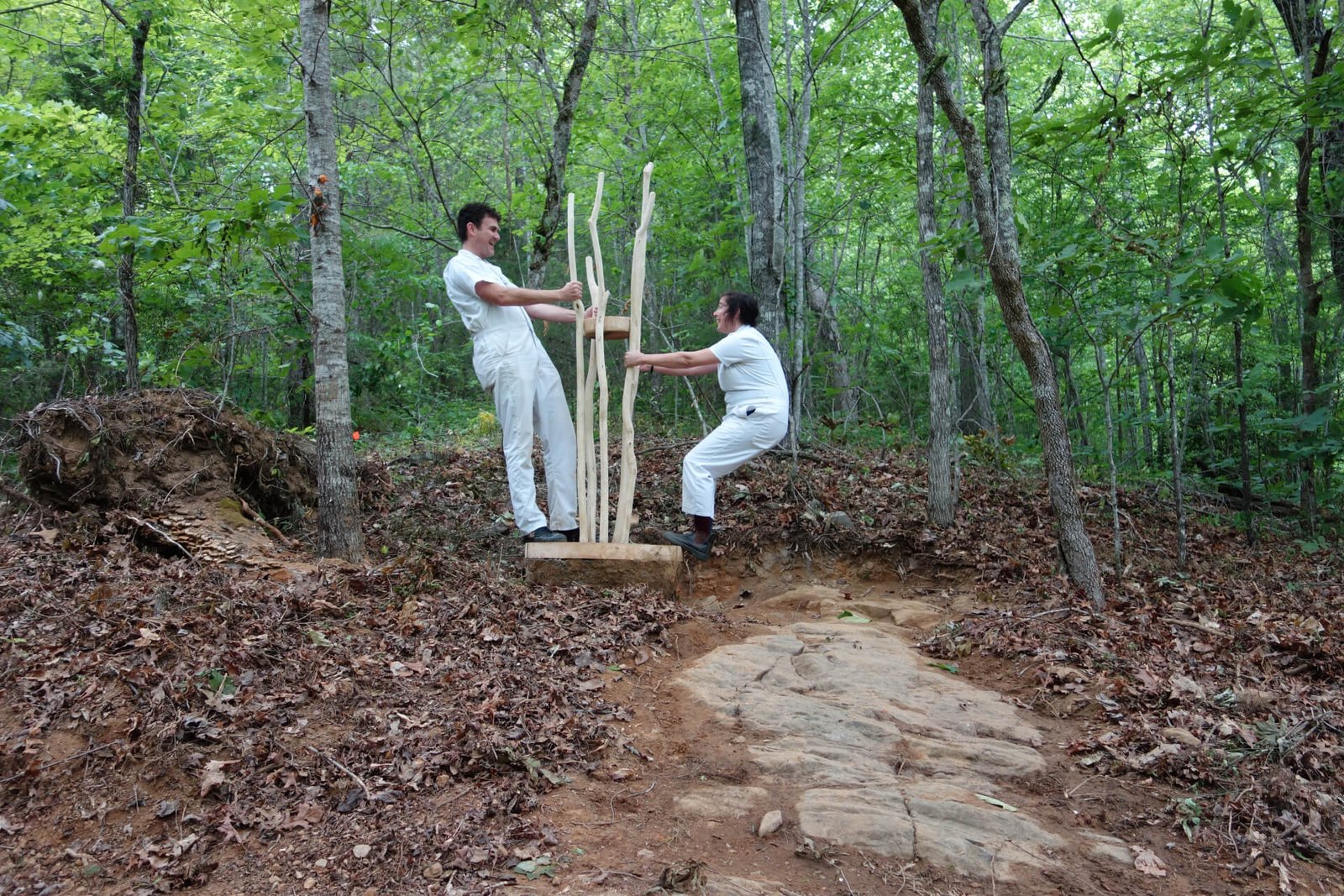 Dirtball was inspired by an earlier project dirtmaker (completed by members of Kosmologym in another collective: Camp Little Hope). Dirtmaker was created for a hiking trail at Western Carolina University in the Appalachian Mountains.

This hiking trail was in a young forest on a steep hill that had until recently been used for agriculture. The seasonal plowing of the field had left the hill stripped of minerals. We became interested in creating an artwork that would allow people to reverse the process of mineral erosion.

With dirtball we revisit the idea of remineralization but with a more open invitation to non-human players. The court is composed of a concrete key, a plant key and the soil between them.

With its recognizable basketball form, The concrete key is the most overt invitation to human players. Here the typical smooth concrete surface of an outdoor basketball court has been exchanged for pavers made of several experimental concretes. These concretes are made of a variety of non-standard ratios (concrete is typically a mix of cement, sand, gravel and water) with the addition of dirt and charcoal.

Concrete is typically made with fairly locally sourced materials. (The dust that is a byproduct of this process can be used as fertilizer if it doesn’t have chemicals added to it). For our concrete we used a black volcanic basalt from Dresser Trap Rock and sand sourced from an elsker of the Superior Lobe glacier. We sourced soil from the site and used an unactivated hardwood charcoal. We used standard portland cement for this project but future versions will explore alternative pozzolans as portland cement is a major factor in greenhouse gas emissions.

Some pavers also have text cut through them to speed their decay. THE VIOLETS IN THE MOUNTAINS BREAK THE ROCKS (a paraphrase of a Tennesse Williams’ line from Camino Real)

As humans play games on this experimental surface the pounding feet and bouncing ball will slowly wear down the concrete. The same physical and weather related processes and flora & fauna that drive the centuries slow breakdown of bedrock will work alongside humans to release the court’s minerals into the soil at an accelerated pace.

These non-human soil makers have a key opposite the basketball hoop. Here prairie forbs, sedges and grasses send roots deep into the dirt. These deep roots promote water infiltration, make the plants flood and drought resistant, capture carbon and encourage arthropod diversity among other benefits.

Walking from sculpture to sculpture at Franconia Sculpture Park it is easy to see the waist high green around the paths as overgrown grass. But the park did a prairie restoration project a few years ago and the green is a diverse and complex selection of plants. We set out to identify as many of these plants as we could during our residency and these form the core of our key garden. Our garden flowers will attract pollinators and the roots will invite microbes and arthropods to play.

Above the plants and arthropods, opposite the basketball backboard against the Minnesota sky, a purple Martin house awaits residents. Purple Martin have a long running close relationship to humans in North America.

The martins of the central and eastern parts of the continent have been offered housing by humans for so long that they have forgotten how to make their homes in trees. The martins song and their aerial diet, heavy in mosquitos has made them close friends to many humans. The Purple Martins delightful aerial acrobatics make them feel like a good team member for dirtball. 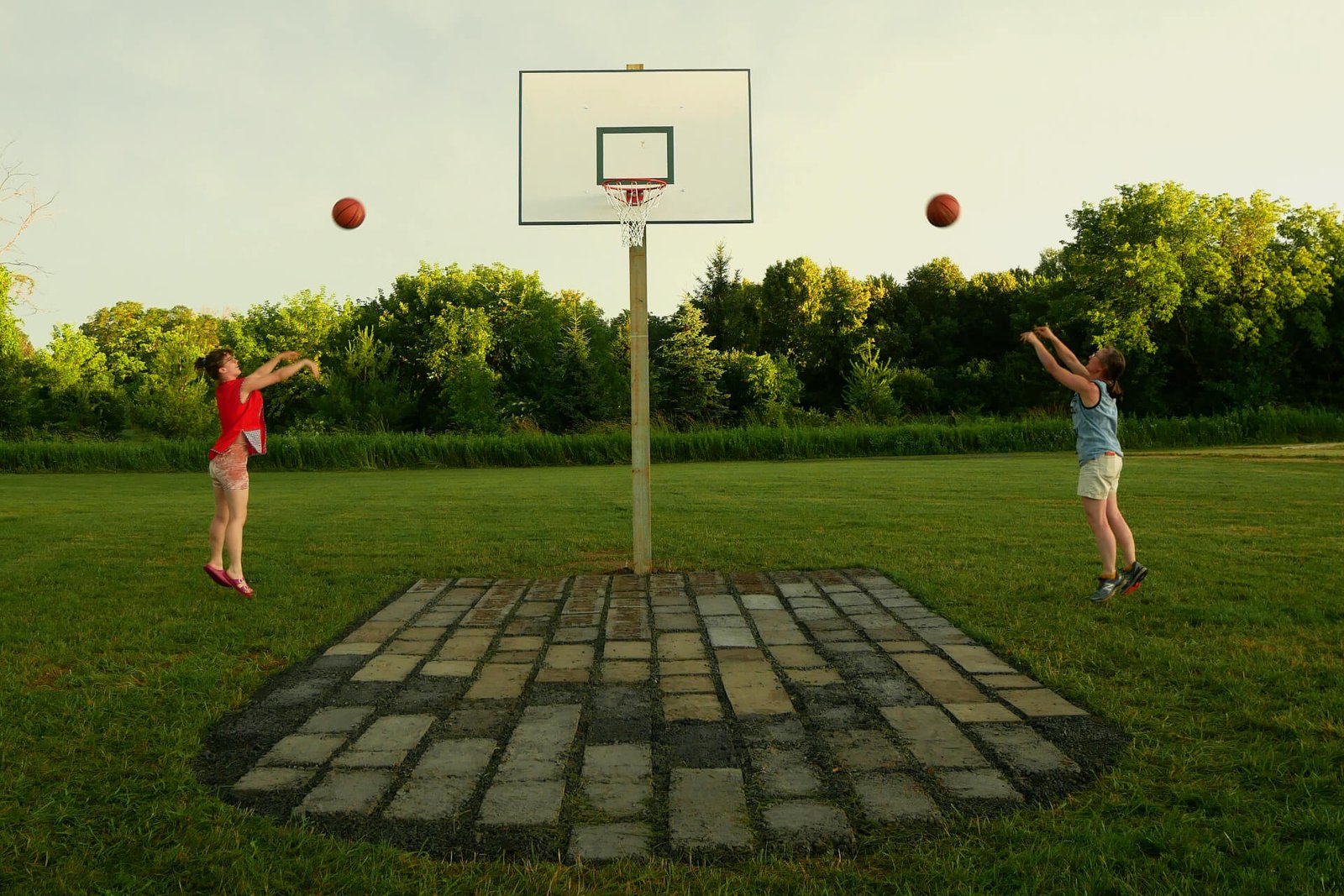 Dirtball sets out to frame a complex centuries long and ongoing process in the bounds of a basketball court. For us this serves two goals. The first is to implicate individual human beings in these beautiful, monstrous, and dirty webs of being. The second, perhaps even more hopeful, is to hurry the dismantling of the boundaries between disciplines, bodies, species and ideas.

Special Thanks to Joanne Campe from Remineralize the Earth for their advice regarding remineralization, to Joe Sausen for teaching us more about purple martins, Tom Dickhudt for help idenitfying native plants, Roy Robison at Landscape Alternatives for helping us figure out which plants we could put in the ground in mid-summer, and our fellow artist residents, the inspiring and hard-working interns and the staff at Franconia Sculpture Park.